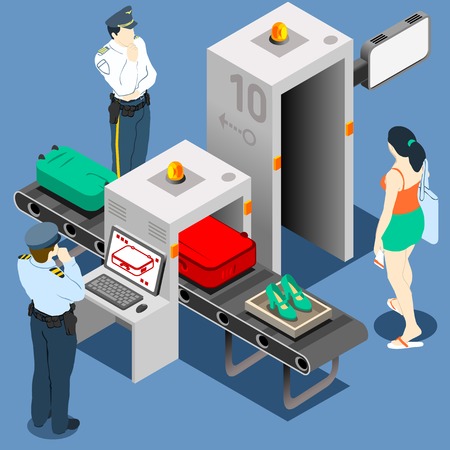 The thing that worried me most about going on holiday with a cochlear implant was airport security screening.  I was confident that my improved hearing would stand me in much better stead on the holiday itself, but what if I didn’t HAVE a functioning implant because something had gone wrong at an airport?

Would it set off the security alarms?  Could it be damaged by the security screening?  Should I switch it off on the plane? Too much browsing of the internet had unearthed a series of horror stories, including tales of problems at our departure airport (Manchester).  Someone wrote about having a big argument with the screening staff at Manchester, resulting in security guards being called.  Help!  I just want to go on holiday, not have a run-in with officialdom.

I set about gathering the facts from the Cochlear Implant Centre in Bradford and the website of the company supplying my particular brand of implant, Med-El.  Sadly, their advice differed somewhat.  The hospital leaflet (a generic one, covering all brands) said that the security systems could damage the speech processor, which should therefore be “passed around the outside of the system”.  What did that mean?  What if the security staff insisted on it being screened?  The Med-El website, on the other hand, said it was fine to go through screening wearing it.  Hmmmm……..

Feeling hyper-nervous about the whole situation I decided to email Med-El’s UK office for definitive advice.  Their reply, received the next day, said I should remove and turn off the processor (the bit that sits behind my ear) before going through the screening process, on the off-chance that the magnetic fields in the screening systems might scramble the programming.  They said this was very unlikely but it was a sensible precaution.  I should then carry the processor through the scanning machine and put it back on again only after the process was finished.

I’d been worried about what to do if the security people insisted on putting the processor through the X-ray machine (the one for backpacks, handbags and things) but I was reassured that would be fine, so long as the processor was turned off at the time.

They said the internal parts (the implant itself) MIGHT set off a security alarm at the body-screening stage.  Staff might want to use a hand held scanner instead.  They reminded me to carry with me my implant ID card, in case proof was needed that I have a foreign body in my skull.  Med-El supply a booklet giving translations of the text on the ID card into forty different languages, so I took that too. 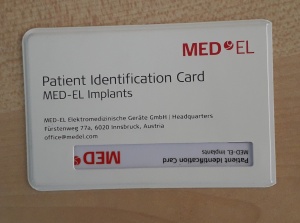 Finally, they said I should turn the speech processor off during take-off and landing, at the times when passengers are advised to turn off electronic devices.

So, readers, I did all that and it was absolutely fine.  Nobody batted an eyelid.  No security guards were called.  No alarm ever went off.  Nobody asked me for my ID card, or asked for the card to be translated into Spanish (we were in Patagonia).  This was despite the fact that the processor, given my very short hair, is very visible and that I was taking it off (to switch it off) in plain view of all the screeners, carrying it through the screening device and then, in plain view again, re-attaching it.  Nothing at all happened in several different airports, from huge international hubs to small local places.  They’d obviously seen it all before, and very relieved I was too.  The moral – be prepared but don’t worry.

Talking of which, going on holiday now involves carrying even more kit than when I just had hearing aids.  I was carrying

All these things, plus a holiday loan of an entire processor (thank you Med-El, what a great service) took up about a third of a small rucksack (but they gave me peace of mind).

Now, technology tamed, how did the actual holiday go?  I had a lovely time and (mainly) I could hear.  I could hear our guide.  I could hear the other people on the trip.  It was so different from the previous holiday (you can read about that here if you missed it) and so much better.  Could I hear as well as the other participants?  No.  But did I feel sad, left-out and fed up?  Never.  I missed some of the banter on the bus, but if I wanted to talk to someone I could.  I missed a little of what the guides were saying in some circumstances, but if I missed a bit it was insignificant enough not to matter, or I could ask them to repeat, or ask Nigel to fill me in later.

You may remember that the group meal sessions had been a particular problem on our last holiday, leading to my first ever restaurant tears.  This time, I could do it.  Again, I missed some of the banter (too quick for me).  I needed full concentration in noisy places (when are restaurants ever quiet?) but I could talk to the people next to me and opposite me.  Some people have voices that carry better than others.  Some people have accents that are hard to decipher.  But I was there.  I was present-in-conversations as well as physically present and it made such a difference.

One night, I glanced along the table from the people I was talking to and saw our coach driver, Winston, sitting several places down.  Winston spoke Spanish (he’s Chilean) and a tiny bit of English.  People on the group spoke English, and VERY little Spanish.  (I can do a passable rendition of “I’m sorry, I don’t speak Spanish”, “two beers please”, “hello” and “thank you” but it didn’t help much).  I watched him for a few moments;  sitting in silence, playing with his cutlery a little, looking around…….surrounded by people speaking a language he couldn’t decipher.  That was me, in Ethiopia.  It’s not too bad whilst you are eating (although somewhat embarrassing to finish your meal ages before everyone else, because there are no distractions).  But when your plate is empty you’re adrift. You try not to attract attention (because then it would become apparent all over again that you can’t communicate) and you try not to look miserable (because you don’t want pity).  That was me, but now I can speak the language again.  Not as fluently as other people, but easily enough to get by.  What a joy it is.

9 thoughts on “Taking an implant on holiday”