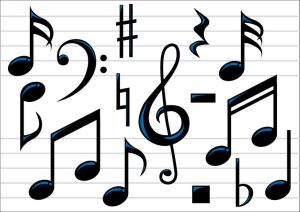 On Tuesday I attended a music workshop at the Cochlear Implant Centre; yet another part of their excellent rehabilitation programme.  Four recently-implanted-people, plus some relatives, spent a couple of hours with the two Speech and Language Therapists, Jill and Lynne, listening to various pieces of music and talking about what we might do to help the brain make sense of it all.

Not surprisingly, music is a rehabilitation challenge. When you remember that twelve electrodes have taken the place of more than twelve thousand hair cells in the cochlea it’s a wonder that music isn’t completely off the agenda, but some people do very well.  It’s another type of brain training.  I went along open-minded and intrigued, but also aware that spending hours and hours on music brain-training wasn’t going to happen, for the very good reason that music has never been a big part of my life.  Losing music as my hearing gradually worsened was a loss, yes, but not one I fretted about.

That said, I have pieces of music that I like, that bring back happy memories or that make me smile.   It would be good to find a way of enjoying those.  I’d got used to how they sounded through my hearing aids but the implant had changed all that, rendering most music very odd indeed.

Sitting in the group we shared experiences of what music is like for us now.  One chap told the story of listening to organ music in a church, being unable to recognise any tune at all and just wanting, desperately, for it to stop.  I sympathised. The last time I heard organ music (years ago, with hearing aids) I likened it to random banging in a boiler house.  He’d tried other things (music had been a big part of his life until his hearing loss) and said that the best yet was the Beatles, almost anything by the Beatles. We talked about why that might be.  Familiarity?  Simple tunes (in some cases)?  Maybe both.

Jill explained that many people find familiar songs the best and easiest to begin with.  The brain remembers the song (the tune, the lyrics) and that helps make sense of things. Repeated listening, in the same way that we are repeatedly listening to speech, and understanding more and more of it, does the trick for some people.  On the other hand, she said, other people can never reconcile the sounds they are hearing now with their clear memory of how the song SHOULD sound.  It will never sound “right” to them.  Some of this group go on to enjoy music very much, but they will switch to a different type of music, that doesn’t have that sense of poignant disappointment.

We started listening to some short extracts of different types of music, with accompanying visuals (from YouTube).  We tried piano solos, tango music, violins…..all manner of things. It was interesting how different our reactions were.  I found the lower registers flat and tuneless but perked up when the violins came in with a melody.  Other people quite liked the deeper sound and described the violins (and sometimes the female singers) as ghastly, caterwauling screeching.

All too soon it was all over.  In what other circumstances does the NHS invite you to sit in a room with congenial people and listen to Nina Simone and music from The Jungle Book?

Back in the car for the trip home I dug out my trusty Bridget St John CDs (I’ve written before about my love for this forgotten seventies folk singer) and listened.  I’d tried them quite a few times since the implant with no success but, mysteriously, they suddenly sounded a lot better.  I enjoyed it.  As I drove through the Bradford traffic a particular favourite came on – I remember setting things up so it would play as I drove out of the car park on my last ever day at work, launching me on a new life chapter.  It sounded great; partly, I must say, because it includes an extended sequence of birdsong that I hadn’t heard since the 1970s.  There it all was, loud and clear.

I enjoyed myself so much it was puzzling.  A couple of days before I’d tried this CD and given up very quickly; nothing sounded at all right.  So why the difference?  My only theory is that two hours of listening to music kick-started something in my brain, in much the same way as, on day three after switch-on, “Brain” decided that the strange high pitched squeaking wasn’t an infuriating distraction it was SPEECH.  Maybe “Brain” had now decided “oh, I get it, all that thumping and squealing is MUSIC – why didn’t you SAY???”

I suppose the conclusion to all this is that I really must start listening to more of my old favourites, to see what else I can enjoy.  I have an eclectic list in the back of my kitchen notebook (used for recipes, meal planning, times when the library is open and other odd bits of ephemera….).  On the back page is a list of songs, probably jotted down after I’ve enjoyed them (in hearing aid days) on some TV programme or other.

Here’s the list and, after each one, my reaction today.

Of course, some people would say that Cohen was always like that so I tried Roberta Flack……much better, recognisable and enjoyable.

Common People.  Pulp.  Quite good.  I love the words.  I love Jarvis Cocker.  The music didn’t sound right but I enjoyed it overall.

More than this.  Roxy Music.  No.  Just no.  Another deep male voice??

Only You.  Flying Pickets.  Yes!  Brilliant!  Loved it!!  Is this because the “music” is all actually vocalisations??? Whatever the reason, it sounded just about perfect.

Too much too young. The Specials.  Pretty good.  Simple beat.  Endlessly repeated simple words.  Great dancing and jumping about on the video.

Wot’s…uh the deal.  Pink Floyd.  Good.  Slow, simple lyrics.  I needed to find a version with captions but I enjoyed it.

Will you still love me tomorrow?  Carole King.  Sadly, because this really IS a favourite, it was dreadful, with the music drowning out the voice.  Maybe I should look for a different version.

So top score to the Flying Pickets then, but other things that sounded OK.  Definitely worth some practicing after all.

6 thoughts on “Listening to music after an implant”